The Expansion dock is a powerful piece of hardware that simplifies the usage of your Omega. It allows you to power the Omega and communicate with it via serial through the Micro-USB port, and makes it incredibly easy to use the GPIOs and Onion Expansions. 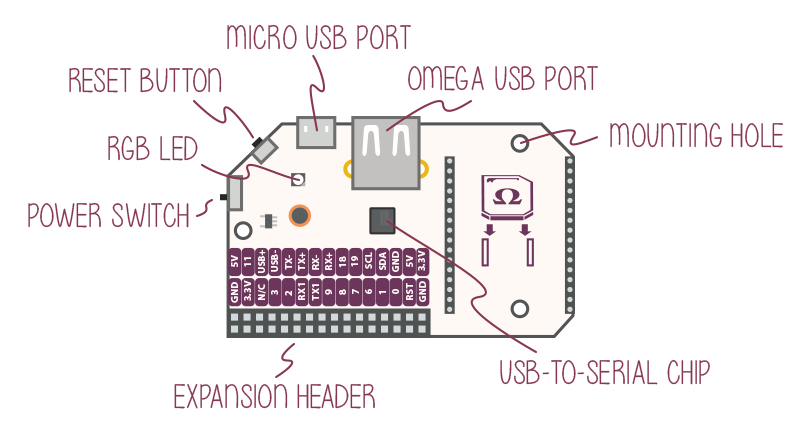 The Expansion Dock allows for easy communication via the USB-to-Serial chip located in the center of the board. You’ve also got a great RGB LED that you can control through the command-line interface.

The reset button, located between the power switch and the Micro USB port, can be used to quickly reboot your Omega, or you can hold it down for a factory reset if your Omega is ever in a bad state. 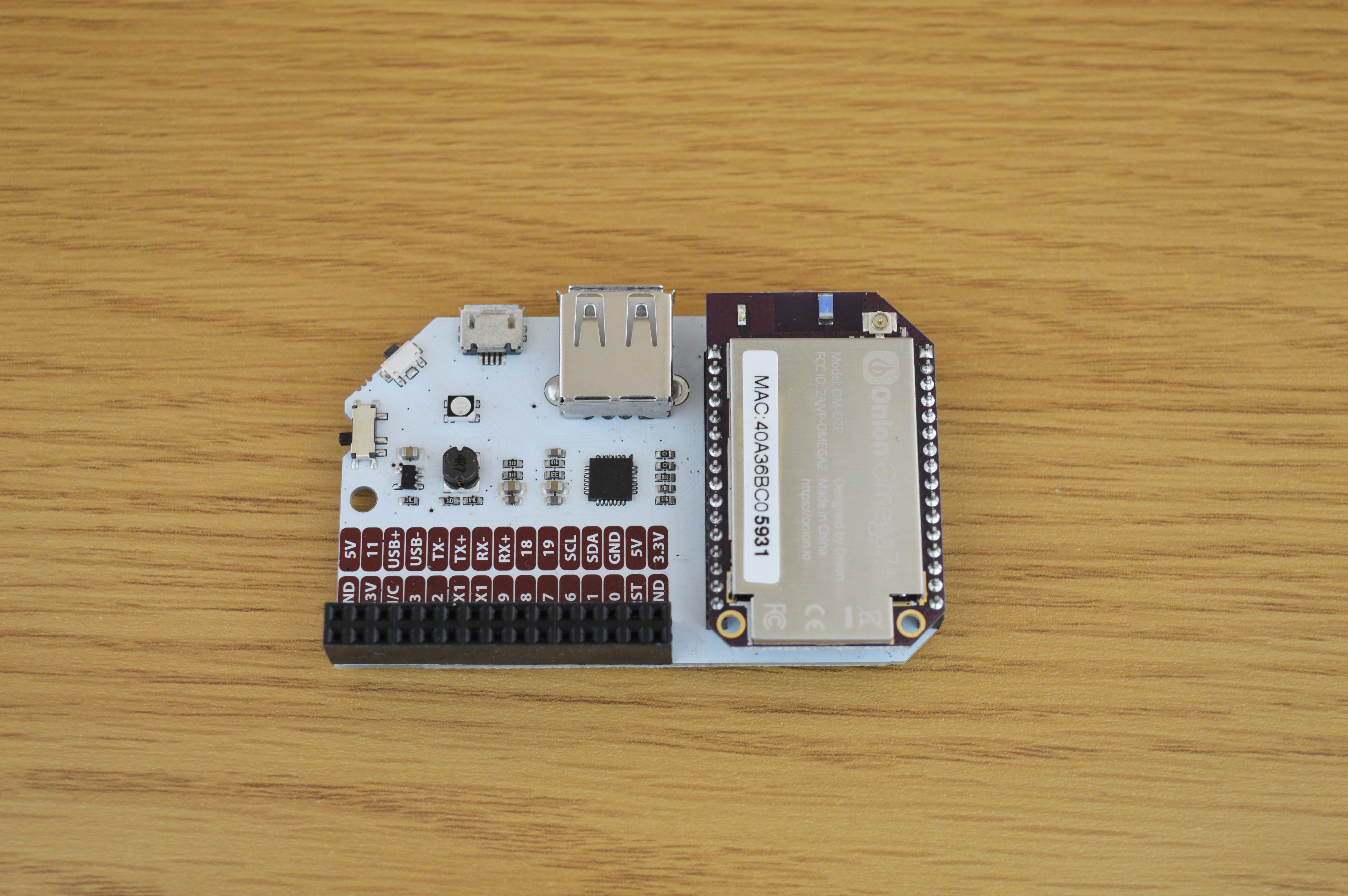 Make sure your Omega is pushed all the way down as demonstrated in the picture below: 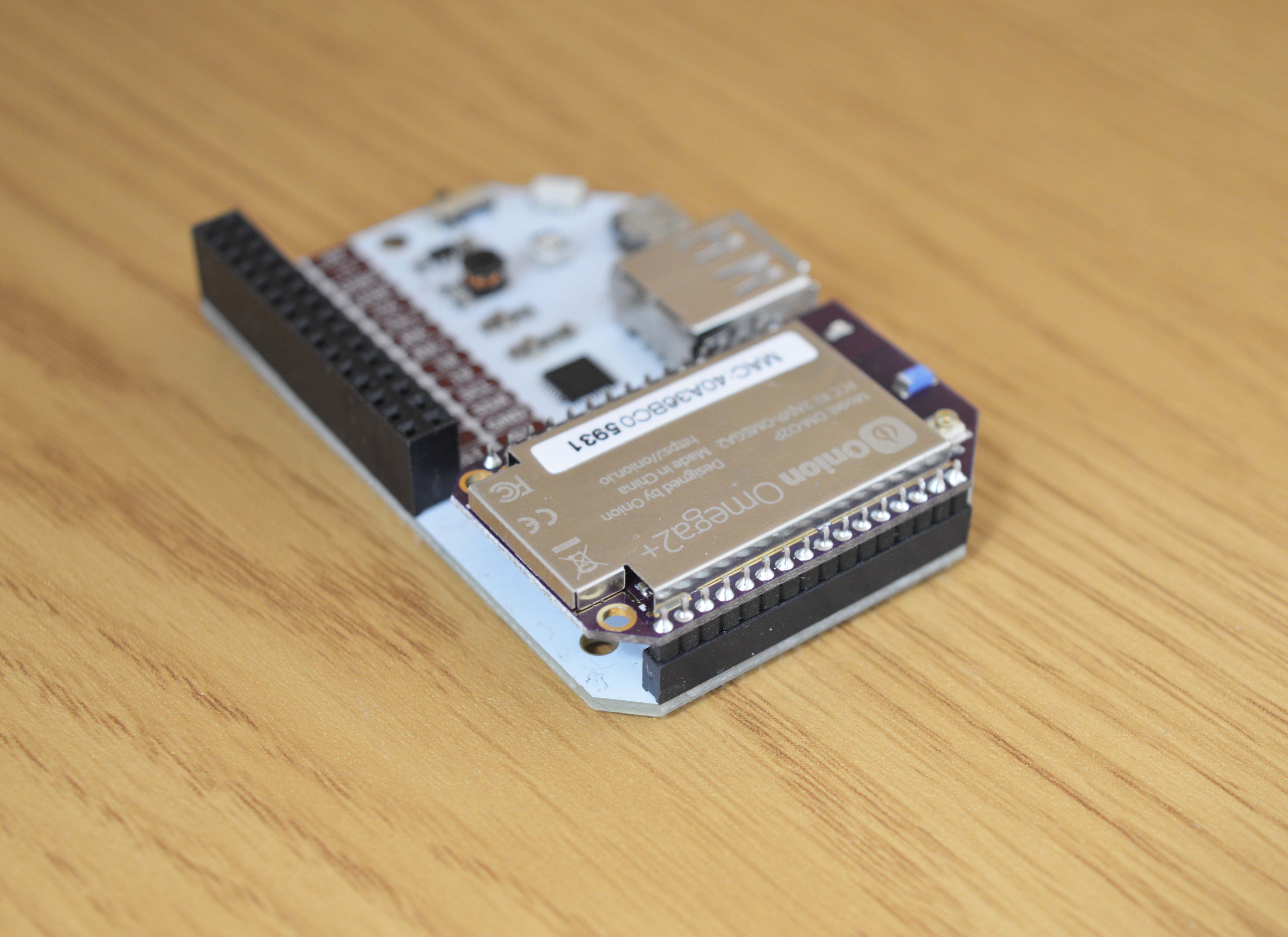 You may need to line up the pins with the holes before pressing the Omega into the Dock.

The pinout diagram below shows the Expansion Header’s connections and the possible multiplexing options: 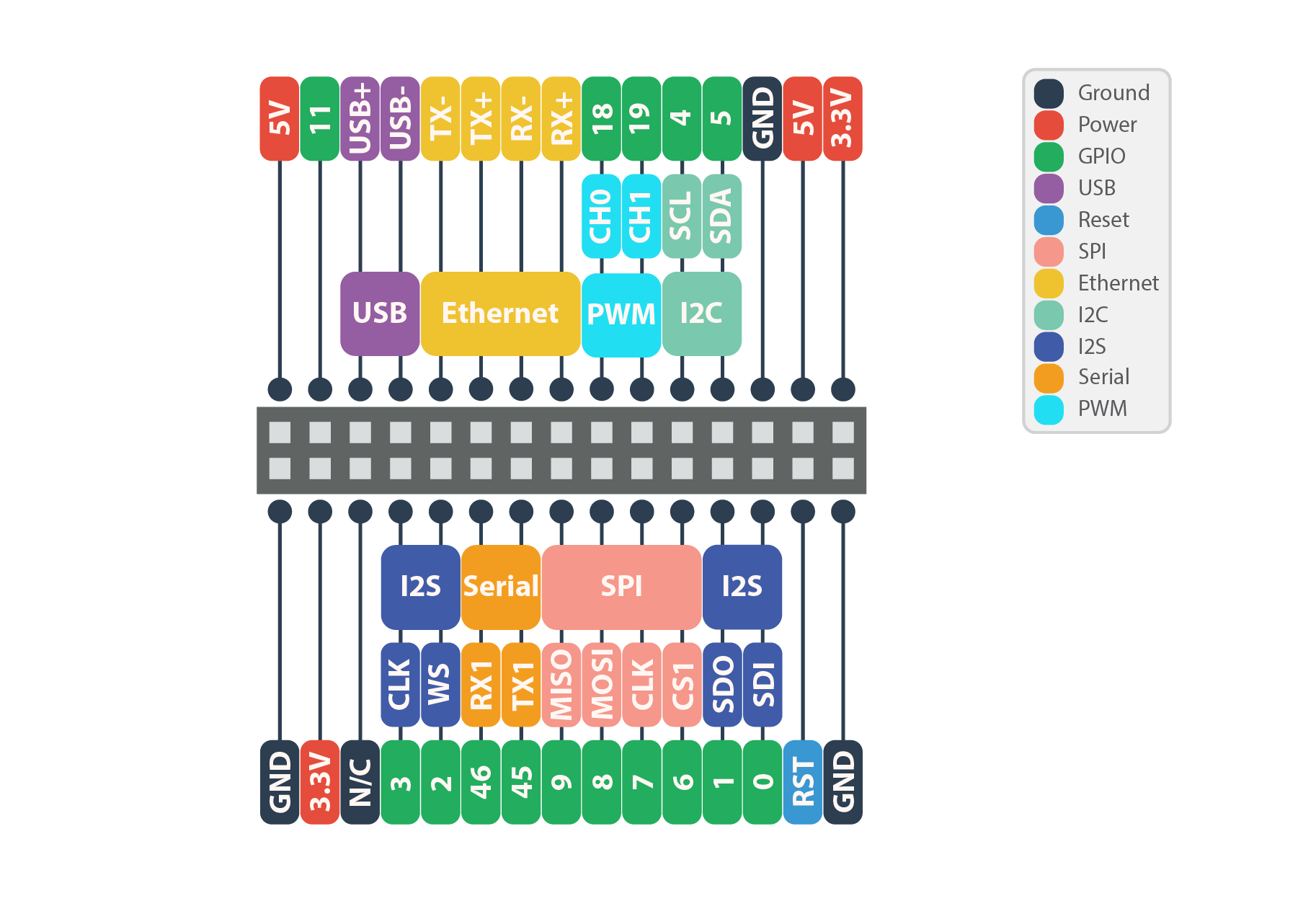 By default, the Serial, SPI, and I2C pins implement these communication protocols and cannot be used as GPIOs. Similarly, the I2S and PWM pins are set to GPIO mode by default.

To learn more on changing the functionality of the Omega’s pins, see the Multiplexing GPIOs section of our article on the Omega’s GPIOs.

The Micro-USB Port takes in 5V, and the Dock comes equipped with a voltage regulator to step the voltage down to 3.3V required for the Omega.

The USB-to-Serial chip allows for a serial connection between the Omega and a computer using the Micro-USB port. You can connect a Micro-USB to USB cord from the Omega to your computer, open a terminal, and connect to the Omega via a COM port as opposed to SSH.

The Power switch will cut power to the Omega, but not the serial chip. This means your computer will still detect a USB serial device, but will not be able to communicate with the Omega.

The Reset Button on the Dock is connected directly to the Omega’s Reset GPIO. Pressing this button do one of two things: reboot, or factory restore.

Momentarily pressing the reset button and letting go will initiate a reboot of the Omega OS.

Pressing and holding the reset button for 10 seconds then releasing will trigger a factory restore.

Warning: This will reset your Omega to the default filesystem of the last firmware update, this will delete ALL of your data!

The Omega’s USB Port can be used to connect to all sorts of devices, namely a USB storage device to extend the storage space of your Omega. The USB port supports USB 2.0, and is a type A connector.

The RGB LED is active-low, meaning that setting the GPIO to 0 will turn on the designated LED.

We’ve made available a detailed diagram of the dimensions and geometry of the Expansion Dock.

The Expansion Dock makes it incredibly easy to use your Omega. It let’s you easily power your Omega, and use Onion Expansions without any external circuitry required. It also makes sure that you don’t accidentally burn out your Omega by supplying too much power.

The GPIOs on the dock can be controlled using a number of tools we’ve included in the Omega firmware. You find more on how you can control the Omega’s GPIOs in the article on using the Omega’s GPIOS

You can use the expled tool to specify the color of the RGB LED. It will use software PWM to drive the three LEDs.

The LED should now be pink-ish. Try experimenting with other colors!